From congenital to accidental, there are many types of deformities. In this article, you will discover 10 most shocking facial deformities that will shock you. Some succumbed in the fight, others manage to live a normal life against all odds.

Suresh lives in Tamil Nadu, a state in south of India. He suffers from a rare medical condition called leontiasis ossea, also known as lion face syndrome’, which causes his facial bones to grow abnormally and uncontrollably large.

According to Suresh and his family, he spent nearly half his life living with the deformity, after it began more than 22 years ago, when he was 18 years old. Now the face is so big that surgical intervention is required to save his life.

The disease caused Suresh’s jaw to swell painfully huge and his cheek bones became large and protruded sideways out of his face. This puts pressure on his two nasal bones, causing the bridge of his nose to become smaller and his eye sockets to deepen.

There is no cure to stop Lion Face Syndrome. It can only be treated by surgical removal of the overgrowth. But Suresh does not the money to pay for the treatment. Fortunately, Dr Sunil Richardson and his colleagues intervene and did the surgery free for him. When questioned, Dr. Sunil states: “Surgical treatment is the only effective choice and we did a cosmetic shave of the lesion without leaving an obvious scar.”

As you can see in the post-surgery picture, Suresh looks completely different.

Most of you probably know Adam Pearson. He is a British actor who has neurofibromatosis. But he does not let the disease pushes him in a corner. He is a presenter, campaigner, in addition to being an actor. He appeared in the 2013 film Under the Skin, a 2013 science fiction film directed by Jonathan Glazer and starred Scarlett Johansson.

Pearson graduated from the University of Brighton with a degree in business management. He worked various jobs in television production for Channel 4 and the BBC, including the shows The Undateables and Beauty and the Beast. Among others, he was nominated as UK Documentary Presenter of the Year at the 2016 Grierson Awards.

Adam Pearson was born in 1985, healthy without the deformity, along with his identical twin brother Neil. In 1990 he hit his head, which results in a bump that would not disappear. Later on, He was diagnosed with neurofibromatosis type I, a neurodevelopmental disease characterized by skin discoloration and the growth of non-cancerous tumors along nerves in the skin, brain, and other parts of the body.

That little girl, Sophia, was born with an extremely rare facial deformity in addition to other deformities to her hands and feet. She had Rett syndrome, a rare genetic neurological disorder that affects mainly girls and more rarely boys.

It impairs brain development and function, and causes loss of speech, Involuntary hand movements, Loss of muscle tone, breathing and sleep disturbances, to name just a few. Sophia case was so severe that she depends on her family for 24/7 care.

Her mother told CNN, “She’s had 22 surgeries. She has a feeding tube, and a colostomy bag. She has seizures and choking spells because of both the deformities and the Rett syndrome.” But despite all, she was a happy little girl full of life, the mom said.

Unfortunately, she was also cyber-bullied for her facial deformities. This is an evil world. Weaver, the mother, received a particularly vile tweet which includes a photo of her daughter, along with a paragraph advocating for coerced abortion and practices tantamount to eugenics.

Another tweet read: “She will live a miserable life and be a burden on the family and society. Civilization does not run on feels.”

She fought back and got the tweet removed. Sadly, Sophia died about 2 months after the family started hospice for her. She succumbed to a high fiver. She died in peace surrounded by her loving family that was there for her from the day she was born.

My deepest condolences for the family.

This cute 14-year-old boy dies after surgical removal of a 10-pound tumor. I am a strong and courageously 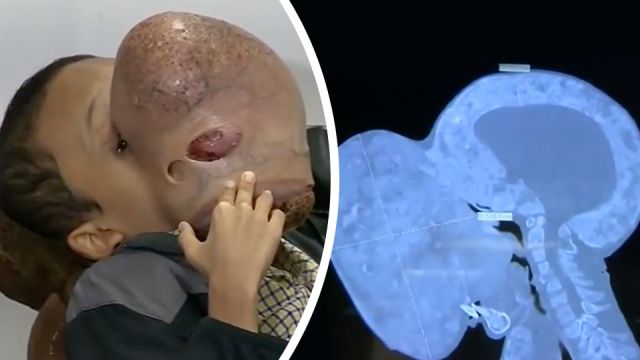 person but this picture makes me cry. It touches me to see his little hand trying to hold the tumor. This is tough for anyone with a heart to see. I send all my love and condolence to the parents.

His name is Emanuel Zayas. He suffered from a rare medical condition called polyostotic fibrous dysplasia.

For more than 11 years he fought the disease courageously, but he succumbed during the surgery. The tumor was successfully removed, initial signs were encouraging. But the boy experienced kidney and lung complications and passed in the intensive care unit at Jackson Memorial Hospital in Miami, Florida.

“Our condolences and prayers for Emanuel’s family and the loss of a very brave young man,” said Dr. Robert E. Marx, a surgeon at Jackson Memorial Hospital. “Another angel has arrived in Heaven.”

The name of that Chinese woman is Wu Xiaoyan, she’s often called “avatar girl” because of the deformity she has on her face. She suffers from a rare disease called fibrous dysplasia, a noncancerous bone condition characterized by development of abnormal fibrous tissue in place of normal bone. As the tumor expands, the fibrous tissue can weaken the bone, causing it to become deformed or fractured.

Surgery is crucial to avoid fetal complication. But therapy is costly; Wu’s parents are not financially capable to pay for it. Meanwhile, she cannot breathe or smell with her nose. She is also in a lot of pain, her mom says.

If you have any update on her recovery, kindly share it with our readers.

As the name suggest, it is a miracle Tres Johnson is still alive to celebrate his 13th birthday. He was born with a rare disease called craniofacial duplication or diprosopus, which means “two faces” in Greece. His parents were told he would not survive at almost every stage of his life.

Cranofacial duplication is an extremely rare congenital disease where parts of the face (sometimes the whole face) are duplicated on the head. The condition is so rare that only 36 people in the world have been diagnosed with it. Tres is one of them. He was born with a large cleft, 2 separate nostrils, an abnormally shaped head, cognitive delays and epilepsy. He had little to no chance to survive.

He has undergone many surgical procedures to reshape his skull and close the cleft. He has been also under medications and Concentrate Cannabis Oil for the seizures, which have reduced from 400 to 40-a-day. But the fight is not over yet: “He is developmentally delayed, because he has cysts in his brain, and, mentally, he is at the age of an infant. But he is progressively improving in all areas.”

Saidi Ngawaje was a physically fit and attractive young man. 10 years ago, a noncancerous tumor started showing on his face, which later was identified as Neurofibromatosis, a condition that causes non-malignant tumor to form in the brain, spinal cord, and nerves. Neurofibromatosis is genetic and depending on the type, it can cause bone deformities, learning disabilities, high blood pressure, vision loss, hearing loss, difficulty with balance, and chronic pain throughout the body. Without a proper treatment, it can lead to cancer and other serious complications.

Saidi needs treatment as soon as possible. But, due to the disease, he is not able to work; so, he is penniless. Worse, he has 2 children and his wedded wife to take care. At the present moment, the situation is so critic for the family that he is staying in his cousin’s house, while his wife and the 2 children are living with another family member.

He is begging for help. According to the publication, you can donate by calling +255713603117 or email Saidi [email protected]. I cannot guarantee the donation is indeed going to Saidi. Use your own judgement before you donate.

Huang Liqian neglected and ignored an abnormal growth that appeared on the back of his neck since 1990. He never saw a physician. 17 years later, after the growth become a 15kg tumor, he has finally decided to see a physician.

Medical diagnosis revealed he had an advanced on-malignant neck tumor, which will continue growing without proper treatment. But now the growth is already associated with severe pain, stiffness and impaired movements.

Huang was taken to Hospital of Chongging University of Medical Services, Southwest China, where he received medical care and have the tumor removed surgically.

This case involves another Chinese man called Yang Huimin. The name of his facial is called Arostegui Syndrome. According to the mom, the problem started with a small bump when Yang was 4. The mother thought it was just a pimple and did not seek medical help.

As Yang got older, his face started to swell, although he took medications.  It has reached a point where the only option left is surgery, which cost about 200,000 yuan, nearly US$25,000. The family received donation and Yand underwent the surgery. In addition to the bone, unhealthy tissue and fat, weighing nearly 2 kilograms, were also removed from Yang’s head.

His surgeon states: “Although Yang’s head still looks a little different from normal ones, his skull was repaired to normal after a proliferation weighing 1 kilogram was removed.”

Now yang’s biggest wish is to find a wife.

The name of this man is Xia Yuanhai. He lives in Laotu village in Chongqing, southwestern China and has facial 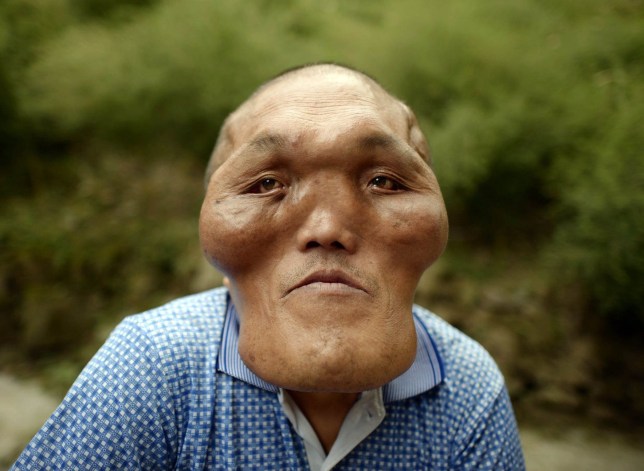 According to his brother, Xia Yuanchang, the deformity started in adulthood and developed gradually. Treatment was too expensive for the family; they did not seek medical help. Now Yuanhai is completely disfigured.

The family is raising money in order to get enough funds for corrective surgeries, hoping he will undergo a life-changing facial surgery which can improve his look. If you have any update on his condition, please let us know.

Thank you for reading to the end. If you have any comment or update on any of these people, please share it with our readers.

Intellectual Property Lawyer Salary, Tips To Hire The Best One Next post